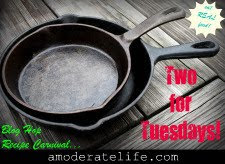 This was originally going to be a post about cooking in the crock pot on hot days. Well I didn't get it started in time so it has morphed into a baked dish.
Experienced cooks will see what I did and think - yea, so? What's the big deal?  But if you are a relatively new cook it might be interesting to see how I changed the recipe so we could eat quicker. This was voted a keeper in my house by all at the table - which doesn't happen often.

Because this is Two for Tuesday - part one is just a quick tip I learned years ago from a mom of 11 who had little disposable income. She never uses a cutting board. Ever. She just uses a dinner plate. Often if you are just cutting up veggies or fruit you can just rinse, dry and use the plate for dinner. And so, I often more out of laziness than anything use a plate. This is a great tip for those with small kitchens. 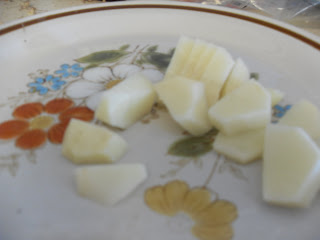 Now for the Original with my modifications:


Crockpot Scalloped Potatoes with Ham
6 cups raw potatoes, cut into small cubes (4lbs organic peeled, cut in half and then into half moon slices.)
1 med. onion minced (I sauteed this in butter because the cooking time was too short, could have boiled with the potatoes)
1 tsp salt (and pepper - I used more this is to taste)
1/2 lb cooked ham, cubed
4 TBS butter (grass fed if possible)
4TBS flour
1 tsp salt
2 cups milk (I used raw whole grassfed milk)
1 1/2 cups freshly grated shredded cheddar cheese - I used an additional cup of muenster - I think a sharp cheese would have been better.
You could easily make this vegetarian by omitting the ham, and maybe adding some chopped sauteed red pepper. I have also used cooked breakfast sausage or sweet Italian in place of the ham - a cheaper option.


Crock Pot instructions:
1. Layer potatoes, onion, 1 tsp salt, pepper and ham in slow cooker (I grease it with a little coconut oil for ease of clean up).
2. Melt butter in saucepan. Stir in flour and 1 tsp salt. Cook until bubbly. Gradually add milk. Cook until smooth and thickened. (this takes a bit, be patient) Add cheese and stir until melted. Pour over potato ham mixture, stirring lightly.
2. Cover. Cook on low 6-7 hours, or High 3-4 hours.


Oven instructions:
1. Peel and slice potatoes, add to water in large pan, bring water to a boil and then turn off. Let potatoes keep cooking until you are ready to layer.
2. Make cheese sauce (see above or here ) 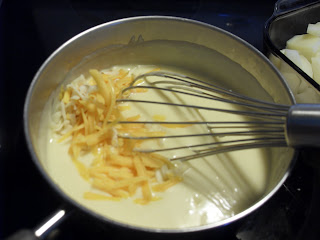 meanwhile,
3. Slice onion and saute in a little butter until translucent.
4. Shred cheese.
5. Dice ham.
6. Grease 9x13 with butter so potatoes don't stick.
7. Strain potatoes, being careful to keep their shape - I just use a large spoon with holes.
8. Layer as follows: potatoes, onions, ham, salt, and pepper. Top with cheese sauce and stir lightly.
9. Cook in a 350 degree oven for 25 minutes. (I turn off the oven at 20 minutes and then leave in for about another 10) 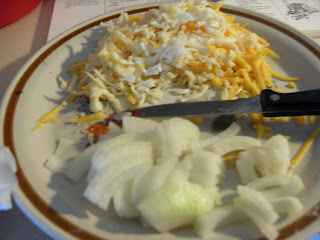 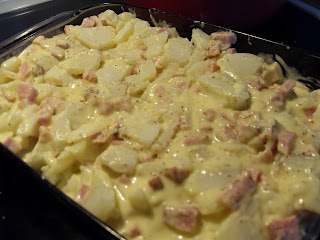 I am also going to be linking this post to 11th Heaven's Homemaker Monday.
Mouthwatering Monday's @ A Southern Fairytale
Make It Yourself Monday @ Eat from your Pantry
Posted by Christy at 6/28/2010