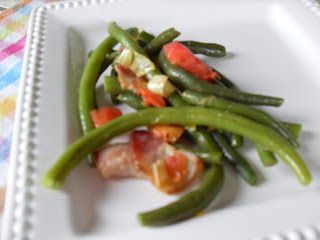 I think I have mentioned before that we live in Amish country - lots and lots of farms with signs at the end of the driveway - "Produce". I have my favorites I usually stop at but my husband is lured in by cute little Amish kids pulling wagons with fruits and veggies in the back. Last night he bought a gallon of green beans. For $5.00. Helluva deal if you ask me - I pay a lot more at the Farmers Market. He gave half to one of his workers and brought the other half home.
Two problems: First problem - no one really likes fresh green beans except me. Second problem - I don't have a pressure canner and most places I checked said "must be canned in a pressure cooker".

The one nice thing about being the only one who really likes them is that I can make them any way I want, and I wanted them with bacon, and leeks, and tomatoes!

In a large skillet over medium heat, melt butter; add bacon. Fry bacon until crispy; adding leek about half way, at the end add tomato and cook a minute or so set aside. Bring a pot of water to a boil; add beans. Boil for about 10 minutes, or until desired doneness is reached. Drain beans; add them to the skillet with bacon and butter. Toss well and heat until well coated. Add salt and  pepper; devour serve.

Linked to Real Food Wednesday, and Simple Lives Thursday. plus The Ultimate Recipe Swap:Fresh Produce.
Lots of great links at these places - get a cup of your fav. drink and check them out!
I was a little late to join Tuesday Night Supper Club at Fudge Ripple - but being the sweetie she is, Christy linked me anyhow!
Mrs. Matlock's AlphabeThursday - Summer School - Green is the color of the week!
AND Finally - I linked this to The Two For Tuesday's Real Food Blog Hop - Hosted by yours truly and 6 other fabulous ladies!!!