Beets are Good - Who Knew??

Years ago I went on a diet that had you eat beets everyday. At the time I didn't even know people cooked beets from scratch and so I ate can after can of the nasty stuff. Oh, did I just say that out loud? Anyhow I have never tried them again, as a matter of fact I avoided them at all cost. 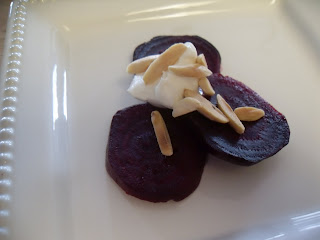 But then I have been reading lately about people loving beets. Not only because they are nutritional powerhouses but because they taste good.


So I decided to give them a try. I was able to buy some from the Amish Farmer's Market down the road. I checked out Mark Bittman's How to Cook Everything cookbook and he suggests cooking them in foil. I decided to put them in my Dutch Oven which I lined in foil. After I cut off the greens I washed them well and put them in the oven for a little over an hour.


While I was waiting I played a mean game of Go Princess with my princess Sylvia - I won 2 and she won once - oh yeah, I always play to win - even with a 5 year old!


I also toasted some slivered almonds while I waited. When I was looking for ways to serve beets I found several recipes that had walnuts in them, I don't have any right now but I did have almonds.


Once they finished cooking I removed the skin - and sliced them into rounds.


I prepared them two ways - the first was with a little salt and pepper topped with sour cream and almonds. I liked this but I wouldn't call it exceptional although I couldn't believe the difference in the taste between canned and home cooked - AMAZING!


The second way was super easy, I just buttered and salt and peppered them. This is my favorite of the two. I also was serving a cucumber dish that is made with sour cream and vinegar and I grabbed a cuke slice on my fork along with the beets and swirled them in the sauce and it was yummy! It resembled the pairing of sour cream in the first but was better because of the crunch of the cucumbers and the tang of the vinegar.

(sadly there is no picture - but you can imagine just beets on a plate with butter and salt and pepper can't you?)
My husband was thrilled - I didn't know that he loves beets. Now my kids - no one was thrilled about them, but I think if I keep offering them I might get a taker or two.

I will be adding beets as an occasional side dish to our meals.

Random fun fact: Did you know that beets have the highest sugar content of any vegetable, but are low in calories? Yup, beets are like a vegetable candybar.

Tell me, do you like beets? What is your favorite way to prepare them/ eat them?