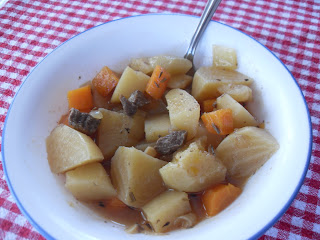 So you know how I just learned to like beets? Well I was inspired by The Local Cook's Winter Borscht  as I made my way through the Two for Tuesday posts - I am inspired by so many of the recipes - I wish I could make more.  Her recipe sounds so amazing.

I had a couple problems dilemmas  to making it - I don't have any barley, my kids are not cooked cabbage fans eaters (at least in soups) I know, you would think with their German Heritage they would be but they aren't and finally my meal had to cook for 3 hours - I had a ball game to go to and needed it in the oven the whole time.

So I decided to make a stew. I heart stew! Stew is my go to winter meal. I had purchased some golden beets (I think that is what they were called) these babies are beautiful and sneaky. They cook up white - so no one knew they were eating beets!! Bwahahaha evil momma! Oh,and I added a half of a turnip - just for fun because I promised I would try turnips this week. The great thing was both veggies cook up white so no one knew if they were eating a potato or not. I did get a complaint of "too many potatoes" LOL!


Brown meat in dutch oven along with onion, add garlic and stir for a minute or so. Add rest of ingredients cover and put in a 275 degree oven for 3 to 3.5 hours - low and slow. Resist the urge to check on it - put it in and walk away.

I don't know if I would use the turnip again - too much white, and I don't know if I could fool my kids with regular beets so this is a special - if I can find them - meal that is delicious with golden beets!


It would be great served with noodles or mashed potatoes - I didn't because my husband got into the dish before I got home and everyone was eating it when I got there.


I did get a complaint that it was too sweet - I used apple cider, I will just use juice next time.


I am linking this to Simple Lives Thursday @ A Little Bit of Spain in Iowa (A blog hop!)
and Food Renegade's Fight Back Friday!
And my favorite class - yea! Mrs. Jenny Matlock's Alphabe-Thursday!
Wholesome Whole Foods #21 @ HealthFoodLover