Pumpkin with Spices and Pumpkin Butter 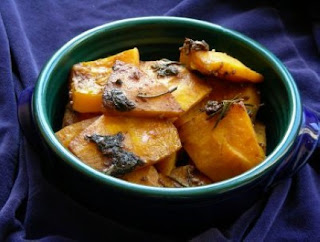 In my backyard we have a compost bin - well actually two, we lovingly call them Phil - and all sorts of things are thrown in the Phil - bin. Last year we must have thrown our pumpkin in because this year, growing out of the smaller one came a pumpkin vine - a long lovely vine that produced 2 pumpkins. Yes, we left them alone - we will "harvest" the good dirt next year.

I made 2 different recipes one for each pumpkin. The first is Pumpkin with Spices. It sounds deceptively simple - it is, but the flavor is wow out of this world.

Preheat the oven to 425 degrees.

Cut the pumpkin into large pieces. Scoop out and discard the fiber and seeds  (actually save to roast the seeds later) (you can leave the skin on or cut it off - it is up to you)

Put the pumpkin seeds in a roasting pan.

Mix the melted butter and chili sauce and drizzle the mixture evenly on the pumpkin pieces.

Put the salt in a small bowl and add the allspice and cinnamon. Sprinkle the mixture on the pumpkin.

Roast for 25 minutes or until the pumpkin flesh yields when pressed gently. Serve on a warm platter and pass the salsa creme fraiche seperately.
Thoughts:
I cut off the skin - next time I won't bother.
This is a great fall appetizer and snack. 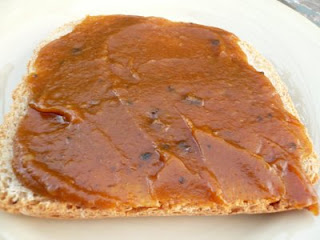 My second entry into grow your own is pumpkin butter. It is so delicious - and easy to make. I made a small amount because I was unsure if we would like it - and boy did we ever! I should have made more.

You can put it on bisquits or toast, or scones, on breads like banana. You can mix it with cream cheese and spread it on a bagel, stir it in your oatmeal, I like mine rolled in a crepe.

You'll need one pound of raw, untrimmed pumpkin for each cup of finished pumpkin puree. To make the puree, remove the stem, cut the pumpkin in half, remove the seeds and fibrous mass and cut the pumpkin into large chunks. I steamed mine for about 12 minutes, or until it's fork tender. It could also be boiled, or baked if you prefer. When it's tender and cool enough to handle, remove the peel with a knife and your fingers. Puree the pumpkin using a food processor, blender or food mill.

Directions:
Combine all ingredients in a large saucepan. Bring to a boil, then reduce to a simmer and cook, stirring often, for 30 minutes, or until mixture thickens.  Easy peasy lemon squeezy!

(When a spoon pulled through middle of the  mixture leaves a trail that does not close in upon itself it is done.)

If you plan to use immediately, let cool to room temperature.  This will stay good for a month in the fridge if it lasts that long or you can freeze it and it will last about 6 months.

I am submitting this to GROW YOUR OWN #45 hosted in September by Heather @ girlichef!

This is also my Hearth and Soul Hop linkup!!