I know I have mentioned it before that I HEART soup.
In a big way.
Sadly my family is not so in love.
Especially when I am serving them a soup that looks kind of like newborn baby poo.
So tonight I enticed them by first making the soup and letting the smell of sauteing onions and garlic fill the house. 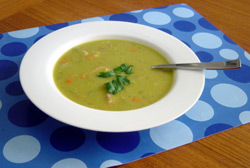 Then a little later after the soup was fully made I began frying bacon.
Oh, the tantalizing smell of bacon brought them one by one into the kitchen.
"What's for dinner? What smell so good?" they asked.


"Split Pea Soup and BLT's".
After they all gathered and prayed I served them a small bowl of soup and told them when they were done they could make their sandwiches.
They were all a little hesitant at first.
Remember it looks like poo.
But slowly I began to hear comments like
"this is actually really good."
and "wow, I thought this was going to be gross but I like it."
Now no one had seconds - there were sandwiches to be eaten but I can and will serve it again.
I plan to freeze the rest in single servings for my own lunch.

1 Pick over the peas and remove any stones. Wash and drain peas. Cover with 8 cups of water and 1 TBS vinegar. Let soak over night.
2. Chop up veggies, saute in large pot - I use my dutch oven - in 1TBS butter and 1TBS coconut oil until veggies begin to soften. Add garlic and cook a minute or two longer.
3. Add 8 cups of liquid - I used chicken broth, and let it get hot and add your drained peas. Add in your seasonings.  Bring to a simmer.  Cover loosely and simmer about 1 1/2 hours, or until peas are tender, stirring occasionally so that they don't stick to the bottom of the pan.
4. Remove the ham hocks. Purée the soup with a blender. If you are using a regular blender, take care to work in batches and only fill the blender halfway if the soup is still hot, and hold down the lid while blending.I like to use the immersion blender because you can only do half and get a rustic look.
5. Return the purée to the pot and heat to serve. Add salt and pepper to taste.
6. Squeeze a lemon and add to the pot - it gives a fresh flavor.
If you want, don't discard the ham hocks, but cut away the outer skin and remove the meat from the bones. Dice the meat and serve with the soup. I just added a cup or so of bits of ham from the freezer. 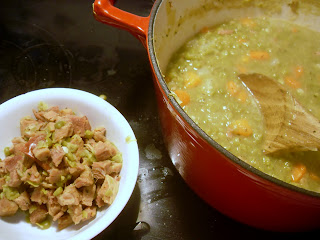 Warning: Don't do what I did (well you can if you want - I will do it again) and put the chopped ham in at the beginning  - I had to pick it out of the soup to blend it because I wanted the taste of the ham to permeate the soup but also wanted the chunks after it was blended. I am sure you can just add the ham in after you blend and it will still taste delicious.

One of the nice things about this soup is because it will be blended in the end you don't need to chop your veggies nicely - just whack them up smallish and they will be fine. It is a super easy meal and could really be made in the crockpot - I just would saute the veggies first because it gives the soup such great flavor.

Another delicious soup my kids like is Shorabat Addas (lentil soup) although they call it mush soup. Split pea is similar in texture and look but has its own yummy deliciousness.

I am sharing this with the fabulous Hearth and Soul Hop hosted by Moi and 4 other amazing hosts along with the following carnivals.
Christy at Fudge Ripples Tuesday Night Supper Club
Dr. Laura's Tasty Tuesday
Posted by Christy at 3/01/2011