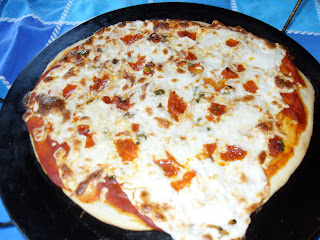 I am always on the lookout for fabulous Pizza Dough - We like it thin, crispy and to have a little flavor. Today I tried out another of Mark Bittman's recipes (I may just become a groupie - who knows), this time for pizza dough.


Mark gives lots of great tips on how to make great dough - one that I have tried before and found made a huge difference - Heat Your Oven to 500 degrees, and your pizza stone (if you aren't rolling right onto it) he suggests starting to heat things up about a half hour before you are going to put the dough in the oven.

He also suggests precooking your toppings - meat and vegetables don't have enough time to cook in the short time it takes a pizza to cook.

Don't put a boatload of toppings will steam the dough as it bakes, turning a potentially amazing dough into a soggy mess.

I used my stand mixer - which he gives directions for - and ended up with a tiny ball of dough. He also suggests letting it rise for like 2 hours, which I did(or 8 in the fridge).

He gives lots of ways to "spice up" the dough but I went ahead and just put a tsp of Italian Seasonings in the flour.

Put the flour, yeast, Italian Seasonings and salt in either a stand mixer (what I have) or a food processor.

Slowly add the water and oil as it mixes - use the paddle until it starts to have trouble then switch to the dough hook.
Cover and let rest for 2 hours or up to 8 if you put in the fridge. I topped it with more olive oil - I am a rebel like that. 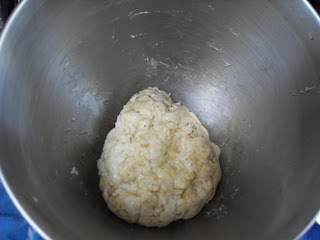 After a minimum of 2 hours take the dough out and split into 2 smaller balls - cover with a towel and let rest 20 -30 minutes.

This is the time to heat your oven to 500 degrees, saute any veggies, slice or shred your cheese (if you are using fresh mozzarella just slice it thin - don't try shredding like we did)brown your sausage if using - I didn't. 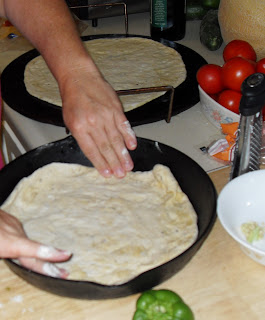 I just sort of toss the dough back and forth - well if you have 10 minutes watch this Alton Brown's Good Eats Pizza Dough Youtube Video - it explains it so well.


If you didn't have time what I did was stretch it out onto my pizza stone - if I had one of those paddle thingies I would have made it on that and transferred it to a HOT stone - but I don't so I put some oil on the stone (and in my iron skillet - I used this as a 2nd stone) first and then stretched away. Once it was the size I wanted I put them in the HOT oven and cooked for about 5 -7 minutes to get the crust going. (this wasn't in Bittman's directions but I have made lots of pizza's and I know we like them better this way).

I then topped with pizza sauce, peppers and onions, mozzarella and finally pepperoni (which of course you can omit) - Yum!

Notes:
1. While this wasn't THE pizza dough - it was the best I have ever made.
2. Think ahead - this is better the longer it sits.
3. LARD - next time use LARD for a crispier dough
4. 1/2 -3/4 tsp salt
5. Make 2 batches so everyone gets enough.
6. Slice the mozzarella thin and leave some air space between so the pizza doesn't get soggy.
7. Bittman is alright - I will be trying more of his recipes!
8. This is an extremely frugal meal and easy, oh so easy!